By applying a low voltage DC power to a TE module, heat will be moved through the module from one side to the other. One module face, therefore, will be cooled while the opposite face is simultaneously heated. It is important to note that this phenomenon may be reversed whereby a change in the polarity (plus and minus) of the applied DC voltage will cause heat to be moved in the opposite direction. Consequently, a thermoelectric module may be used for both heating and cooling thereby making it highly suitable for precise temperature control applications. A thermoelectric module can also be used for power generation. In this mode, a temperature differential applied across the module will generate a current.

A practical thermoelectric module generally consists of two or more elements of n and p-type doped semiconductor material that are connected electrically in series and thermally in parallel. These thermoelectric elements and their electrical interconnects typically are mounted between two ceramic substrates. The substrates hold the overall structure together mechanically and electrically insulate the individual elements from one another and from external mounting surfaces.

Cooling capacity (heat actively pumped through the thermoelectric module) is proportional to the magnitude of the applied DC electric current and the thermal conditions on each side of the module. By varying the input current from zero to maximum, it is possible to regulate the heat flow and control the surface temperature. 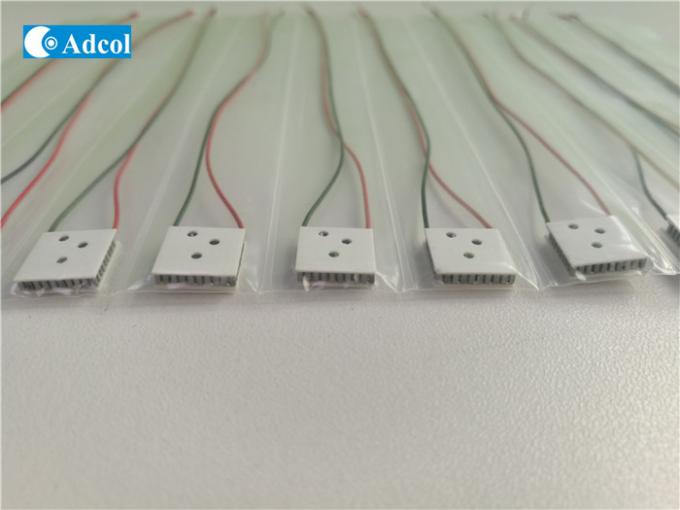 8.7A 17.2V Thermoelectric Module with Two Or More Elements Of N and P - type Doped Semiconductor