Semiconductor thermocouple by the N-type semiconductor and P-type semiconductor. N-type materials have a surplus of electrons, and negative thermoelectric power. P-type materials, electronic, positive thermoelectric power; when electrons from the P-type through the node to the N-type, its energy must increase, and increase the energy equivalent of junction point of the energy consumed. This can be the difference in temperature reduce to prove.

The top of the thermopile cold junction, the following is the hot end. With the heat exchangers and other heat transfer means, so that the thermopile

On the contrary, when the electrons from the N-type flow to the P-type material, the junction temperature will rise. Direct contact with the thermocouple circuit in the actual reference is unavailable, so the above connection method instead, the experiments show that the introduction of a third material (copper lugs and wire) does not change the characteristics of the circuit in the temperature difference circuit.

Several pairs of semiconductor thermocouple according to the figure in the circuit in series, while in the heat transfer in parallel, which constitutes a common cooling thermopile. By icons connected to the DC power supply, this side of the heat continue to heat and maintain a certain temperature, the cold junction of the thermopile into the work environment to endothermic cooling is thermoelectric cooling works. 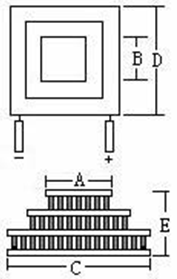